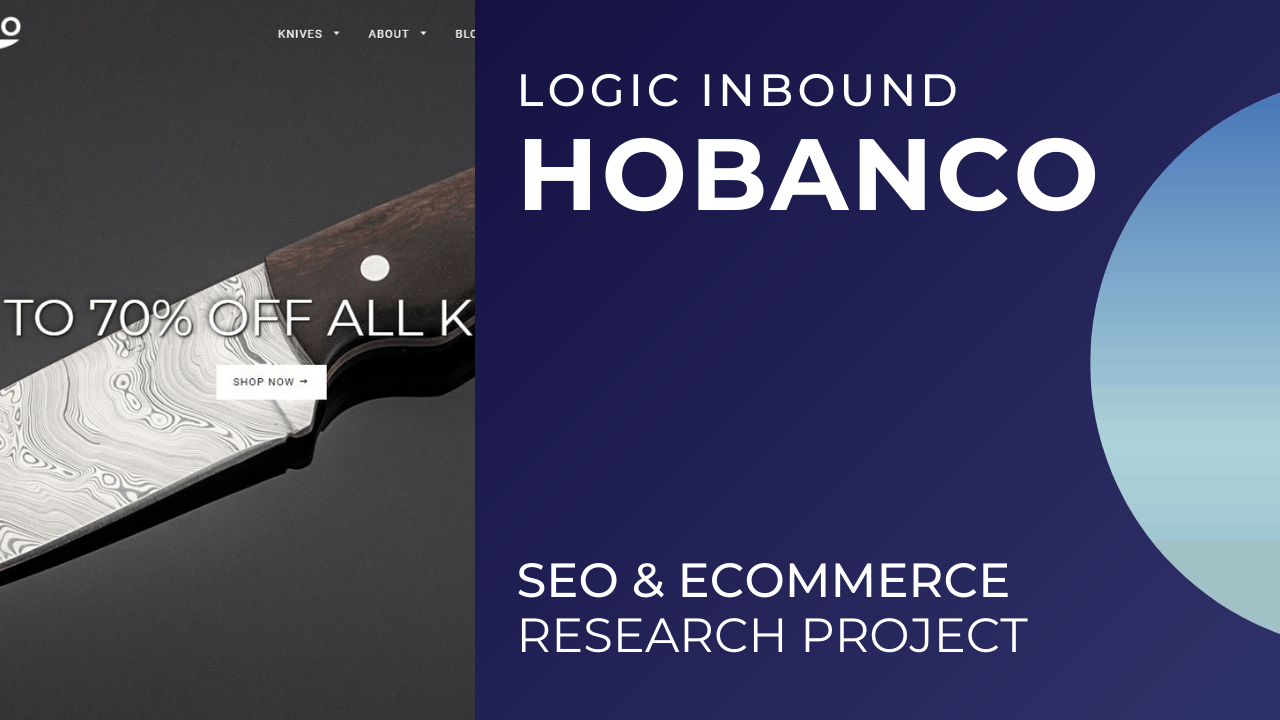 Hobanco is an internal project of Logic Inbound. Created and managed by Logic Inbound co-owner Nick Jordan, Hobanco is an e-commerce provider of impressive and affordable knives. The company itself was established in 2000 as a vendor of high quality knives. Logic Inbound began its SEO campaign for Hobanco in September of 2017. At the start of the campaign, the main focus was to increase sales. Hobanco hoped to reach its target audience and enhance its online presence with the assistance of Logic Inbound. This business dream transformed into a professional reality.

Hobanco opened its e-commerce shop in 2000. After setting the groundwork of the business and allowing the online shop to find its footing, Logic Inbound actively worked on applying its search engine optimization expertise to Hobanco. The team at Logic Inbound knows the importance of executing their SEO strategies on projects of their own. Anyone who claims that they have the solution to low rankings on search results pages, but has yet to test their optimization tactics on content of their own, does not yield unwavering credibility or confidence. Credibility is exactly the characteristic Logic Inbound strives to uphold and side projects are a means by which to do just that.

The challenge was straightforward. Hobanco needed to increase its sales. Logic Inbound set out to compile a strategy that would allow Hobanco to rank higher on Google than other suppliers of knives. If the sales of Hobanco were to reach the desired amount, then more views and sessions needed to occur on Hobanco’s website. Getting Hobanco to appear on SERPs was the first step. Then, Logic Inbound needed to encourage users to click on Hobanco’s website, which generates more sessions. An increase in transactions and overall sales stems from more web page views, because more often than not, people visit a website because they are interested in its content or services. Potential customers are everywhere. Logic Inbound just needed to equip Hobanco with the means of attracting the right people.

After thoroughly inspecting Hobanco, Logic Inbound applied its SEO strategies to the business. Logic Inbound enacted a plan to ensure Hobanco would rank higher on Google and appear in more search results in general.

Many SEO and growth marketing strategies were applied to Hobanco’s website. Logic Inbound started out with keyword research. By analyzing data pertaining to keywords, the team gained a considerable understanding of both competitive and popular keywords. Hobanco was optimized to rank for over 500 keywords. Logic Inbound continuously monitors the keywords throughout an SEO campaign, replacing or modifying them if necessary. Keeping a close eye on keywords is an essential part of online growth marketing.

Hobanco’s website was further enhanced through growth analysis. In this step, Logic Inbound consumes the premise of their client and pinpoints ways the client can continue to improve over time. Logic Inbound wants to ensure the continuation of success rather than provisional profit. In order to secure long-lasting growth, Logic Inbound pays utmost attention to trends and variables that play into them. They consistently analyze the progress and compile reports to share with their clients.
SEO Keywords Targeted
Hobanco currently ranks for over 1,730 keywords. The website alone ranks for 30 keywords on its home page. These impressive rankings happened over the course of three months. An even more powerful statement is the fact that Hobanco ranks on the second page of Google’s search results for the keyword “practice butterfly knife,” a keyword that also has a search volume of 2,900 per month. Hobanco is found on the second results page for the keyword “csgo knives” as well, with a volume of 24,000 searches per month.

Since September 2017, Hobanco has generated 50% more revenue month over month. There are between 1-5 sales per day, which is a definite increase in the overall number of transactions since the start of the campaign.

Graph A is a display of sessions per month, from September 2017 to February 2018. A session is defined by any activity someone partakes in on a website for a set period of time. The length of a session varies, depending on the provider of SEO analytics and statistics. For the sake of this data, one session refers to a twenty-four hour time frame. The graph rises and falls at very slight intervals. Overall, there is a gradual yet continuous incline in the direction of the graph. The graph is indicative of positive outcomes resulting from the SEO strategies of Logic Inbound.

Graph B represents the number of users visiting Hobanco’s website throughout the duration of the SEO campaign. The shape of the graph is a steady upward slope. This rise in users was a direct result of SEO. More people clicked on links that directed to Hobanco’s website because the website appeared in more search results. There is a clear correlation between SEO and higher web page views, as shown above by Graph B.

Logic Inbound applied its online marketing strategies to a company of its own to showcase the unwavering trust they have in their techniques. It says a lot about the credibility of their skill set, seeing as they believe in their SEO campaigns so much that they utilize them for personal use as well. Since joining forces with Logic Inbound and its infallible growth marketing expertise, Hobanco has seen an unparalleled increase in sales. It has transformed into a highly profitable and successful business with the help of Logic Inbound. After reviewing the SEO process and evaluating results, we can conclude that Logic Inbound contributed to the current success of Hobanco through growth analysis, keyword research, relevance, and authority.

“As a search marketing company with a core competency in search marketing, we wanted to target a product category [with] the most search volume…We ended up ultimately choosing knives because there’s about 6-9 million searches every month.”

“We were able to [experience our strategies from the perspective of the clients which helped us] to better serve them.

“There are so many search marketing firms that are selling SEO that don’t rank for anything themselves and they don’t make money from the services that they’re selling to clients…We’re seeing that a lot of clients get burned. We didn’t want to be another search marketing company that didn’t rank for anything and didn’t make anything from search themselves.”

“We wanted to be considered credible as soon as we meet someone. The way that we’re doing that is through internal projects like Hobanco.

“People want to work with people that live and breathe search and by doing Hobanco…not only are we selling a service to you but we’re using it to make money. We’re coming from a place of experience.”